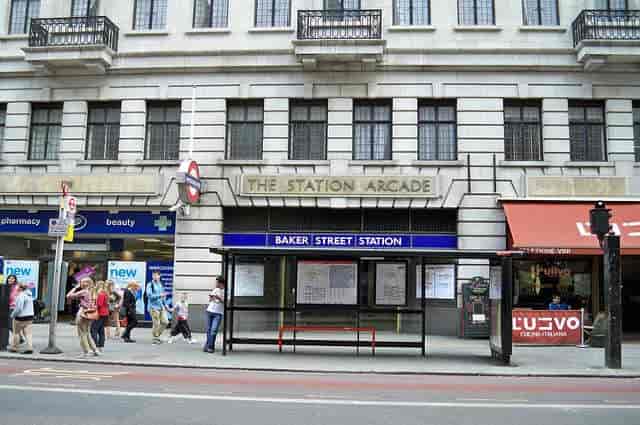 The best place to start your trip through mysterious London would be a museum based on crime and its evolution in London. It would involve looking at evidence gathered by the police in regards to old cases. It would concern descriptions and depictions of famous criminals. London is home to such a place. This is the so-called “Black Museum” first opened in 1874.

You can turn to their site for general information and a hint to what to look for and where; you can also rely on the services of various tour guides. London is awash with those who can lead you on the rounds of two of the city’s most famous crime-related figures. One is the notorious Jack the Ripper. The other is a detective who existed only in the mind of his creator, Arthur Conan Doyle. This is Sherlock Holmes.

Sherlock Holmes
The character of Sherlock Holmes has gripped the minds of readers and serious fans from over a century, much to the chagrin of his creator. Arthur Conan Doyle (1859-1930) grew weary of the popularity of his detective, going so far as to remove him permanently – without success, since popular demand forced a remarkable resurrection. Ironically, long after his own death, the fictional character is still very much alive.

The perfect place to start your Sherlock Holmes tour is by hopping the Underground and getting off at the Baker Street Station at the Marylebone exit. Here, you are greeted by a large bronze statue of Sherlock Holmes created by John Doubleday in 1999. On some days, there is a real Sherlock Holmes wandering the area.

The area in and around Baker Street is given up to making you feel Homes is anything else but a fictional detective. If you wander over to 221b Baker Street, you will be able to visit his home. This is the Sherlock Holmes Museum where the greeter is Holmes’ housekeeper, Mrs. Hudon. She will lead you upstairs where you can see an exact replica of the famed detective’s flat.

The tour is short but chock full of sights of the master detective’s personal belongings. There is also a medical display representing Doctor Watson. Downstairs, you can dine at Hudson’s Victoria Dining Room. There is also a shop selling his hats and all the novels. For more on mystery, you can visit the nearby mystery bookstore, “Murder One.”

There are other places in and around Baker Street devoted to the recreation of this character. The 19th century holds a firm grip on this part of the city permitting the imagination to flow. Sherlock Mews has James Taylor and Company, shoemaker to Holmes. There is the Museum Tavern mentioned in “The Adventures of the Blue Carbunkle” as was Covent Garden.

There are also places from “The Hound of the Baskervilles” and places where the detective duo dined. You can visit another recreation of Holmes’ study at The Sherlock Holmes. This pub, formerly The Northumberland Arms, was where Homes tracked down the character in “The Noble Bachelors,” Francis Kay Moulton. It was also home to the Turkish baths frequented by Watson and Holmes. Across the way is the Old Scotland Yard.

The Sherlock Holmes contains a wealth of memorabilia from an exhibition circulating in 1957. The study is adjacent to the restaurant and viewed through a glass partition. The Holmes, like the Museum, allows patrons to believe Holmes is alive and the game is a foot. The meals consist of pub grub.

While Baker Street and the surrounding area are a shrine to Holmes, the city also notes the importance of Conan Doyle. There are several Blue Plaques posted in his name. Conan Doyle lived at 2 places in London. This was 12 Tennison Road and Upper Wimpole Street. At Wimpole, Arthur Conan Doyle lived and wrote in 1891.

The possible inspiration for his master criminal, Professor Moriarty, Adam Worth (1844-1902) lies in a pauper’s grave in Highgate Cemetery. Look for his grave under the name Henry J. Raymond.
From the fictional, we move to the real world of crime. The other popular mystery tour in London concerns Jack The Ripper

Jack the Ripper
The exploits of Jack the Ripper shook London during the late 19th century. His exploits resulted in numerous theories on who he was and the reason for his crimes. His crimes captured the horrific imagination of many a writer and person. It remains a popular tour today. IT helps that many of the places written about in police reports and newspapers still exist and are accessible.

The average Jack the Ripper visit involves a trip White Chapel Road and the White Hart Pub. You can follow the paths the Ripper and his victims regularly transverse. Visit the site of the Frying Pan Club. The place still houses a restaurant, but you can clearly see the frying pans carved in the building and the old sign.

The cobbled alley of George’s Yard still exists as Gunthrope Street. It was here the body was found of Martha Tabram. The Darts Club was once the Princess Alice Pub where the first suspect, Leather Apron worked. Spitalfields Market, the Wentworth Model Dwellings and Petticoat Lane are all still visible sights.

You can visit Aldgate High Street, the site of the arrest of Catherine Eddowes. After her release from jail she met her death on Mitre Square. The base of operations for the police was probably the Commercial Street Police Station. It is in the area. It no longer functions as a police station. It is now residential. This has been the fate of several of the 19th century police stations. You can visit them in their current incarnation.

The Bath Murderer and Real Jails
If you still have not had enough of crime, you might want to create your own tour. You could follow the footsteps of the notorious gangsters of the East End, Reginald and Ronald Kray. You could also visit 2 sites connected with another notorious murderer of women, George Joseph Smith, alias Oliver George Love, Charles Oliver James, Henry Williams and John Lloyd.

Smith was the Bath Murderer. He slew 3 of his wives, neither of them realizing he was still married. It was all for the love of money – their hefty insurance policies. His victims included Bessie Mundy Williams (1912), Alice Burnham (Blackpool, 1913) and Margaret Elizabeth Lofty (Highgate, 1914).

His murderous spree was cold and always calculated to look like accidents. He was arrested on Uxbridge Road, London. He was detained by Divisional Detective on February 1, 1915. Smith appeared at Bow Street Police Court before eventually facing execution in 1915.

You can look at the site of the Bow Street Police Court. It now hosts a Boutique Hotel. New Scotland Yard and Old Scotland Yard offer mystery fans to see the “real deal” featured in many a crime and detective novel. These include those by P. D. James whose stories of Detective Adam Dalgliesh of the New Scotland Yard occur in London.

You will not be able to locate the Bertram Hotel of Agatha Christie. You can, however, go to the residence of Hercule Poirot. It stands near the Museum of London in Charterhouse Square. Florin Court is the Whitehaven Mansions. You can also visit various sites in London filmed for the movies and televisions series of Poirot, Miss Marple and other fictional characters created overtime by mystery writers. Look at the websites to see where their lives and careers may take you.

A look at the Underbelly of London can be a change from the usual tourist fare. You can take part in a mystery London tour, including real and imaginary villains. Only Sherlock Homes and Jack the Ripper have tours focusing on their real and imaginary lives and crimes. This should not prevent you from following the paths of other infamous British criminals – fictional or otherwise. Do your research and your will be sure to find a route that will allow you to act like a Sherlock Holmes upon discovering the Game is afoot.