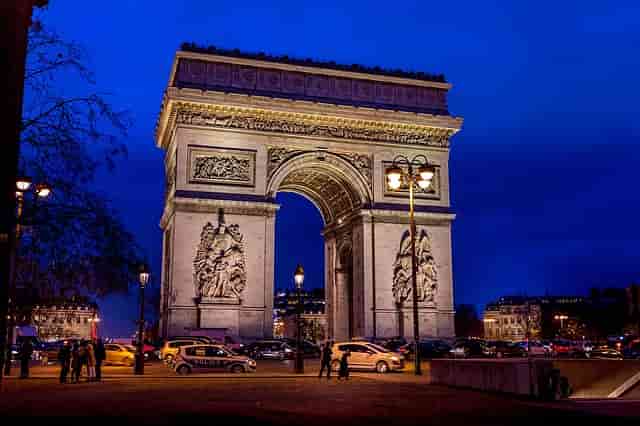 Located in the 16th arrondissement is the Arc de Triomphe. It stands firmly stretching across the wide boulevard at the western end of the Champs-Élysées as part of what is now the Place Charles-de-Galle-Étoile. The Arc de Triomphe is the largest triumphal arch in the world. It is also a major route for state funerals. It has fulfilled this function since 1840.

Napoleon Bonaparte first commissioned the Arc in 1806. It was to celebrate the victories of his Grand Armée. However, it was not completed under Napoleon, but under Louis-Philippe in 1936. By this time, Napoleon had died in exile in St. Helena (1821). Only his body paraded under this arch as he made his way to his final resting place in 1940 at the Hôtel des Invalides.

The Arc has always attracted happy and disturbing scenes. It was through it that Hitler’s Nazis entered Paris triumphantly in 1940. The newsreel footage is an integral part of the history of this period. So, too, is similar footage taken in when the allies came to liberate the city in 1944. It is only fitting it houses the Tomb of the Unknown Soldier.

The Arc de Triomphe is decorated with sculptures and engraved with the names of the many generals of France. As in the case of the Eiffel Tower, you can enjoy the structure from its exterior of make the pilgrimage up to the top.

The Arc has an observation deck located at the top. You can take a stairway or ride the elevator. There is also an observation deck. It contains a small exhibition hall or museum containing a history of the arch. This consists of many lithographs and photographs covering the period.

While you are in the neighborhood, you may consider fitting in any of the following nearby attractions: