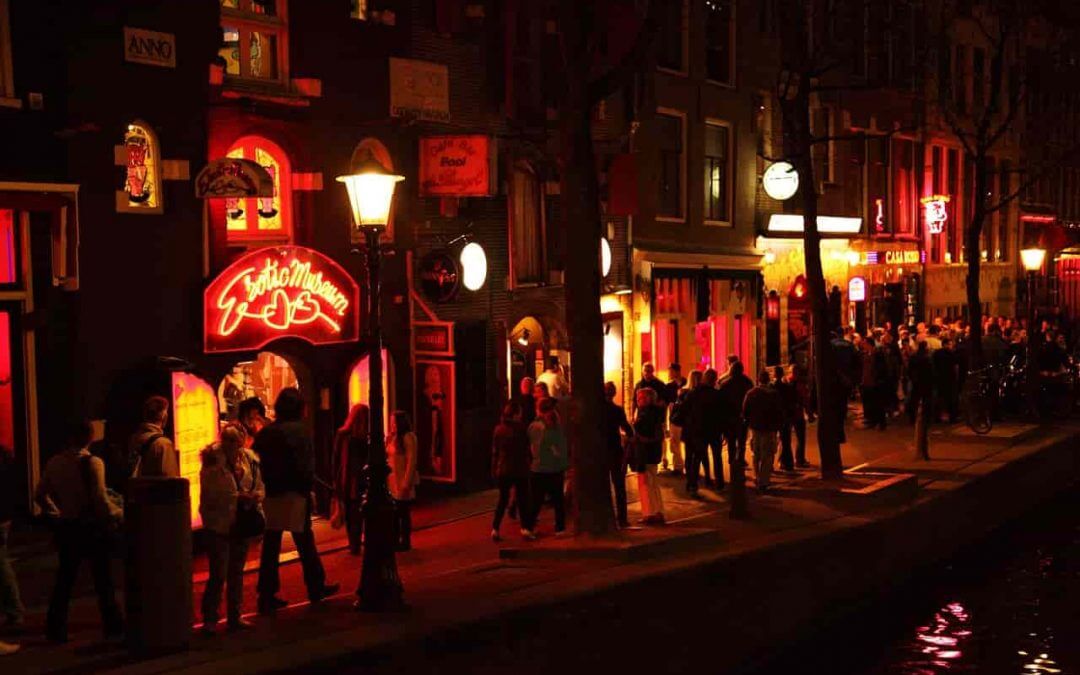 The famous Amsterdam Red-Light District covers a large area in the oldest part of the city. It has been servicing the personal needs and desires of locals and visitors for five centuries, and thanks to the old buildings leaning at odd angles overlooking the tree-enshrouded canals that a certain charm tempts you to linger longer in the area. In this district, music of every genre can be heard along the streets from a dozen or more places late at night. And, it is the classier restaurants, redone streets, and revamped facades that transform what once dark and dingy into one of the most attractive parts of town – the Amsterdam Red-Light District.

Prostitution in the District
Did you know that prostitution is legal in the Netherlands? Yes, it is! It is most concentrated in the Amsterdam Red-Light District where it has enjoyed a long tradition of tolerance. It has been reported that since October 2000, window prostitutes have been allowed to legally ply their trade. Much to your surprise, the prostitutes in the Netherlands are also taxpayers. However, discrimination is still very much part and parcel in this kind of trade as a number of the prostitutes reported that some banks even refuse to grant mortgages for instance.

Now, as a legal profession, the government ensures that all prostitutes are able to access medical care and work in better conditions by way of regulating and monitoring working practices and standards. Also, it is worth noting that contrary to the popular belief, the Amsterdam Red-Light District is actually the safest area in the city as clusters of policemen and private bodyguards employed by the girls themselves are always on duty.

The Amsterdam red light district is also well known as the “Rossebuurt”. It is consists of three sub-districts: the main area is in the Walletjes are located between Centraal Station and Nieuwenmarkt; the Singel, located between Raadhuistraat and Centraal Station; and de Pijp, situated behind the Rijksmuseum. It is worth noting that it is here where women of all nationalities parade their wares in red-fringed window parlors.

Many of these women are ready to offer more than a school boy peep show in a private cabin. The Amsterdam red light district is also well-known for the pads of men, young and old, couples holding hands and pointing in shock of it all, giggling groups of women celebrating a hen night, as well as busloads of Japanese tourists toting cameras but not in the direction of the female entertainers for it is strictly banned. In Amsterdam red light district, you might get trouble if you do that.

There are several hotspots in the red light district of Amsterdam. Few of them are mentioned below, so please read on.

The Chinatown
The Amsterdam Red-Light District is one of the few places on earthy where you can authentic and really tasty Chinese food. The restaurants in this district are easy to find as cooked Duck is typically hung in the front window. However, Chinatown in itself is misleading as there are also dozens of Malaysian, Indonesian and Thai restaurants and cafés scattered along the beautiful canals. Besides the restaurants, there are other Chinese businesses in the Amsterdam Red-Light District, including a well stocked supermarket across from the Waag, near the Nieuwemarkt.