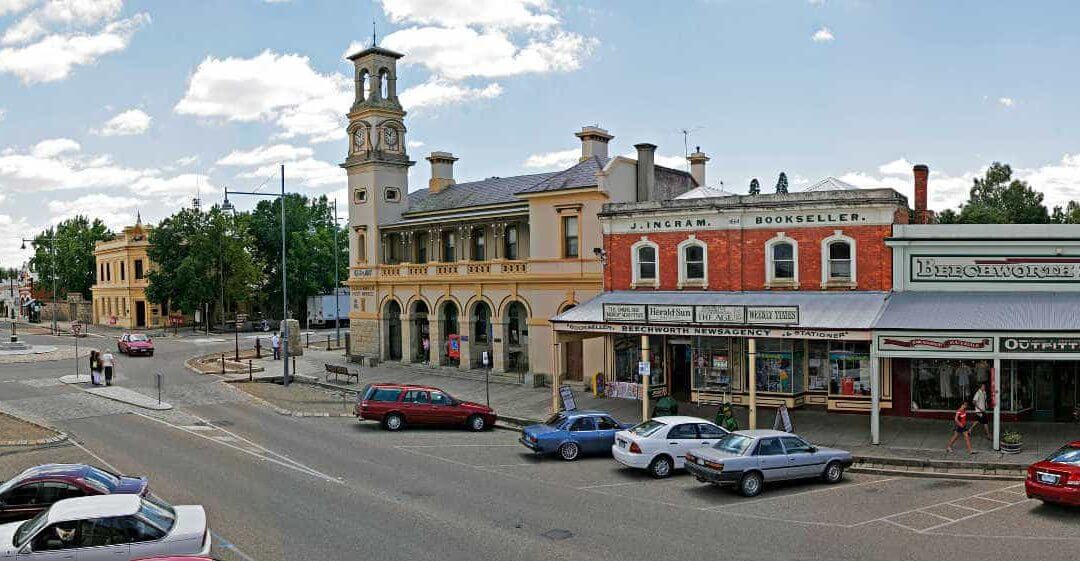 Beechworth City is one of the best preserved early gold mining towns in Victoria, Australia. Its commercial center extends along the Ford Street and the Camp Street. It is filled with many historical frontiers and elegant building dating back from the early 19th century. The post office in the city was built in 1869 and the previous Bank of Victoria dated back from 1857. The bank is now a gold jewelry shop. There are also several churches and historical hotels near the city center.

The Historical & Cultural Precinct situated along Ford Street is a major attraction in Beechworth. It comprise of the city’s museum, town hall, telegraph station, and old court house. The dark cell of the infamous bushranger Ned Kelly is also found inside the precinct. Neighboring to the precinct is the Beechworth Gaol, which is still operating until the present time from the time it was built between 1859 and 1864.

Beechworth City is renowned for its attractive parks and streets that are lined with trees that are deciduous creating intense colorful displays during autumn season. The site of the former Mayday Hills Hospital is currently occupied by the campus of La Trobe University Beechworth. The hospital was established in 1867 and apparently shut down in 1995. Its name was changed to Beechworth Lunatic Asylum and its location was moved to the southern of Albert Road. Today, the asylum became an attraction site for many tourists where attractive gardens and historical buildings reside.

Beechworth is also filled with numerous interesting antique displays and shops. The Beechworth Historic Park does not allow camping activities but there are various creeks and streams in the city that are perfect for camping holidays.

Just east of the commercial center of Beechworth is the Lake Sambell Reserve. A picturesque of the surrounding lake with picnic and BBQ areas can be viewed from this reserve. The lake itself is a known venue for boating and water activities. The reserve also includes a couple of ponds in its Chinese Garden, which gives honor to the city’s Chinese gold rush pioneers. It is also the starting point of the Murray Branch in Beechworth to the Mountains Rail Trail for cycling and walking path. The path is connected up with the main track that goes between Bright and Wangaratta.

For those who want to experience a scenic drive in Beechworth town center, the one-way 5 kilometer route of Gorge Road would be great. The network of walking trails at the Beechworth Historic Park is also great for exercising and other activities. The park is also filled with geological relics and features of the Beechworth region including its gold mining history.

The geographical location of Beechworth along the foothills of the Victorian Alps gives opportunity for tourists to explore the numerous surroundings and vineyards. Moreover, tourists can also enjoy various scenic drives within the city and neighboring areas. Because of the city’s well-preserved historical buildings and how it had re-invented itself throughout the decades, it evolved as a popular destination for the tourists and travelers. It also become as one of the fast-growing wine-producing regions in the world.