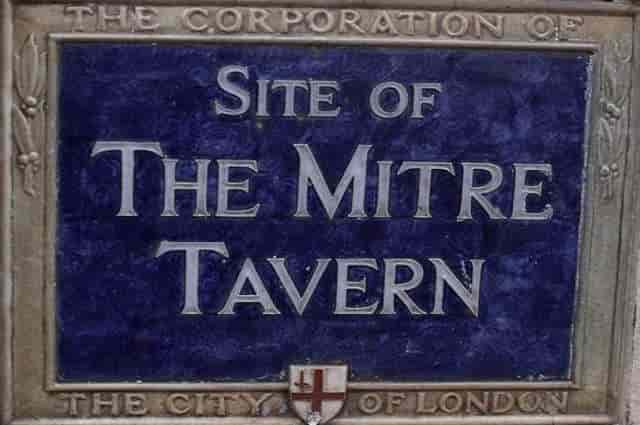 There are many ways to celebrate the lives and contributions of the remarkable individuals who made this city their home. In the past, gravestones and tombs, crypts and burial memorials immortalized them. In London, this practice still continues supplemented by another way to commemorate them.

Besides tombstones and memorials, there are now identification plaques. These provide basic information on certain renowned persons. A blue in color, these Blue Plaques alert passers-by to the former presence of greatness. They point out the former dwellings of some unique individual who at one time had made London his or her home.

Architects
If you want to see where the famous designer of London, Sir Christopher Wren (1632-1723), once lived, head over to The Old Court House, Hampton Court, Green East Molsey.

The builder of St. Paul’s Cathedral, Hampton Court and approximately 50 churches and other public buildings lived nearby to oversee the work. The white façade of Wren’s London residence sits near the reconstructed Shakespearean Globe Theatre. His tomb is in St. Paul’s Cathedral

Sir Charles Barry (1795 – 1860) lived and died at The Elms, Clapham Common. His specialty and love in architecture was the Italianate Revival style. His best-known work, however, is the Victorian Gothic House of Parliament undertake with Augustus Pugin. Barry is buried in Westminster Abbey.

In the center of the nave is a brass made by Hardman’s of Birmingham, covering on the floor. It contains depictions of 2 of Barry’s renowned works – the Parliament buildings’ Victoria Tower and the Palace of Westminster as well as a cross and a simple inscription.

Artists
Sir Edward Coley Burne-Jones (1833-1898) was a leading figure in the second generation of what is called the Pre-Raphaelites. His work consists of medieval knights and fair maidens. Born in Birmingham, Burne-Jones lived at 41 Kensington from 1865-1867. You can see some of his work at Leighton House. For his grave, you would have to go to Sussex.

Burne-Jones is also associated with Downshire Hill. The Regency house at Number 47 was the original meeting place for the Pre-Raphaelite Brotherhood (PRB) including Dante Gabriel Rossetti (1828-1882). The actual founding of the movement, however, took place at 7 Gower Street in 1848.

A founder and moving force behind the Pre-Raphaelites, Dante Rossetti lived in London at 2 separate places. He was at 110 Hallam Street for 1851 and 1856-1859. He also stayed at 16 Cheyne Walk from 1862 to his death. This latter residence was also home to some exotic pets, including a wombat and other artistic types including the poet Swinburne. Dante and his sister are interred in the family tomb in London’s Highgate Cemetery.

John Constable (1776-1837), the Romantic landscape painter, lived in 2 places now indicated with a Blue Plaque. These are 40 Well Walk and 2 Lower Terrace. He arrived in London in 1795 and moved to Hampstead in 1821. You can see his simple tomb at St.-John-at-Hampstead churchyard in Hampstead, Greater London. A greater testament to his life is his artwork found in the National Gallery

The house he was born in at 21 Maiden Lane is now one. Yet other residences of Joseph Mallard William Turner (1775-1851) still remain. During his life in London, Turner stayed at 40 Sandycone Road. He designed that particular home but not the one at 23 Queen or at 119 Cheyne Walk where he lived and worked.

There is also a Blue Plaque dedicated to him in Campden Hill Square Gardens. It is placed near a tree where Turner favored painting. You can view his work at the National Gallery and Kenwood House. There is a memorial to him in the Artists’ Corner in St. Paul’s Cathedral.

A designer of silk patterns, Anna Maria Garthwaite (1690-1763) worked at Spitalfields. She lived and worked from 2 Princelet Street, creating French-influenced patterns that were uniquely hers. You can view some of her work at the Victoria and Albert Museum.

Politicians
Sir Winston Churchill (1874-1965) lived and died at 28 Hyde Park, Kensington Gore. He sat in Parliament starting in 1900. In spite of his fame, his home is not a museum. For a glimpse of the leader, visit the Cabinet War Room beneath the Government Office Building. His final resting place, however is in Bladon, Oxfordshire, at St. Martin’s Parish Church

Although driven out of power and scorned as a supporter of Hitler, Chamberlain remained a member of the Cabinet up until 5 weeks before his death of cancer in 1940. Remembered for the oft quoted phrase “Peace in our time,” Chamberlain lies buried in Westminster Abbey.

Explorers, Sailors and Entrepreneurs
Captain Robert Falcon Scott sought to explore the Antarctic. He did and lost his life in the icy lands that comprise Antarctica. He lived in London at 36 Oakley Street. His widow, Kathleen, created the sculpture of his likeness now at Waterloo Place. There is also a memorial window to him at Binton Church, Warwickshire. More information is available at the Scott Polar Institute at Cambridge.

Lord Horatio Nelson (1758-1805) died from his wounds aboard his flagship Victory at the Battle of Trafalgar. A great hero in his time, he had lived in London at 147 New Bond Street in 1797 and at 103 New Bond Street in 1798. Although buried at St. Paul’s Cathedral, you can see his effigy by Catherine Andras, at West minster Abbey. It was placed there in 1806.

He was a yachtsman not in the navy, but Sir Thomas Sopwith (1888-1989) was an aviator and a manufacturer of aircraft. He lived a long life, part of it – from 1934 to 1940 at 40 Green Street, Mayfair. He once flew across the English Channel (1910) and soon became enamored with the making and flying of airplanes. The Royal Flying Corps used his planes in WWI. He also helped in the manufacture of WWII aircraft such as the Hurricane. He and his wife are buried near Winchester.

Like Nelson, he was a sailor. He was also, like Sopwith, a pioneer aviator and an author. Sir Francis Chichester (1901-1972) singlehandedly circumnavigated the globe in 1966/67 on his ketch, the Gypsy Moth. His home was at 9 St. James Place. Knighted by the Queen, he lies in St. Peter Churchyard, Shirwell, Devon.

Philosophers, Scientists, Socialists and Humanitarians
Friedrich George Engels (1820-1895) called 121 Regents Park Road his home for 24 years. He had met Karl Marx (1818-1823) in 1848 and supported him throughout his life. Marx visited him there and the 2 could have gone to the Queen’s Pub just up the road. Unlike Marx, Engels does not lie buried. He was cremated and his ashes strewn over the sea.

Both the work and the final resting place stand out. His dwelling places tended to be modest. He lived at 28 Dean Street from 1851-1856, and 101-8 Maitland Park Road. He hung out at Engel’s home and the Round Reading Room of the British Museum.

You can visit his grave at Highgate Cemetery. He is, in fact, 1 of their more celebrated guests. Far from being the simple affair he requested, it is an overblown bronze bust above a granite plinth engraved with the words “Workers of All Lands Unite.” You can also find the Marx Memorial Library housed in the 1737 building at 37A Clerkenwell Green.

The naturalist, Charles Darwin (1809-1882), lived, worked and died at Down House, Luxted Road, Downe. There is also a Blue Plaque in his name at the Biological Sciences Building, University College, Gower Street for the years 1838-1842. This is currently the site of the Grant Museum. The Darwin Center is an excellent source of information on Darwin. You can visit his grave in Westminster Abbey.

Of great help to Darwin during his explorations was Lady Dorothy Neville (1826-1913). She lived at 45 Charles Street from 1873 to her death. She was director of the Royal Botanical Gardens at Kew and saw to it Darwin received rare plant specimens. Neville was a horticulturalist, a plant collector and a writer.

Florence Nightingale (1820-1910) lived and died at 10 South Street. The house no longer stands there. There is also a Blue Plaque poster at 90 Harley Street. She is buried in the family plot at the Church of St. Margaret in East Wellow. If you wish to find out more, visit the Florence Nightingale Museum at St. Thomas Hospital, 2 Lambeth Palace Road.

Dr. Sigmund Freud (1856-1938) spent only a year at 20 Maresfield Gardens, Hampstead. His daughter, Anna lived there until her death in 1982. The home is the site of a museum. Each of the rooms is frozen in time, captured in the year of his death. Inside, are all the possession he brought with him from Vienna. Of particular interest is his library and study with his analytic couch.

Creating the League of Nations was the idea of several men. However, the force behind it was Sir Robert Cecil, Viscount of Chelwood (1864-1958). His home was at 16 South Eaton Place. He served as its president for 20 years. When the rage of World War II saw it destroyed, he firmly stood behind the formation of the League of Nations. Cecil won the Nobel Peace Prize in 1937. He was also made an honorary lifetime President of the United Nation Association.

Charles Crufts, founder of the Crufts Dog Show, is at Highgate beneath a rectangular memorial of marble on a brick base. Sir Henry Tate (Tate Gallery benefactor) is interred in a crypt with his wives, Amy and Jane in West Norwood. There is a plaque at the site of his first shop at 42 Hamilton Street. The oldest of London’s public cemeteries, Kensal Green, contains more than 500 individual members of the British aristocracy. These include the scandalous HRH Princess Sophia, daughter of George III. The Blue Plaque system of identification and cemeteries are an excellent and unusual way to discover information about London inhabitants.