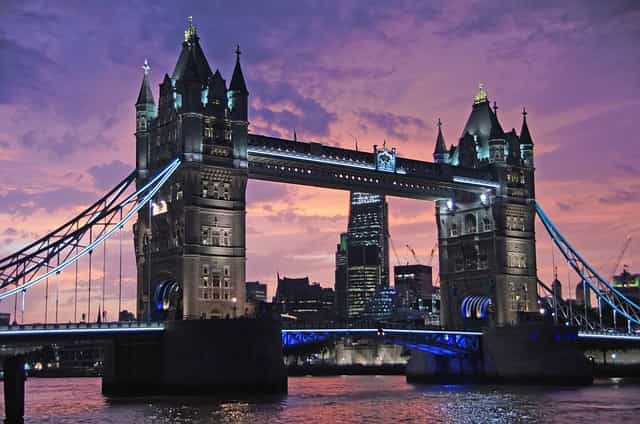 Canary Wharf
The Docklands once dominated the city of London. Ships daily stopped here. When the shipping trade shifted to Tilbury in the 1960s, the docks began to die. The area became derelict.

Today, Canary Wharf and its nearby structures are part of a renaissance of the Docklands. In 1991, Canada Tower rose up to declare a new era. The architect, César Pelli, determined to make a statement. He did so with a towering 800’ tall pyramid topped, glass paneled structure, launching a new center for shopping and offices.

Around the base and nearby are the West India Quay with bars, flats and restaurants as well as former Warehouse #1. This Georgian structure (1803) is now home to the Museum in Docklands.

Changing of the Guard
You cannot not go to see the Changing of the Guard. This colorful spectacle ranks among London’s best ceremonies. It is a regular occurrence during the summer months. Watch the Old Guard replace the New Guard in front of Buckingham Palace. It is all pageantry done as it has been done for centuries.

Kew Gardens – The Royal Botanical Gardens
London offers its visitors many wide-open spaces. Most were once the sole provenance of the aristocracy. Today, the gardens provide enjoyment and respite for all. While some may prefer to frolic in Hyde Park, or stroll in Kensington Gardens, Kew Gardens remains one of the city’s true green gems.

Kew Gardens was created as the pleasure gardens of Prince Frederick in 1731. His widow, Princess Augusta established them as what was to become the Royal Botanical Gardens. Now a World Heritage Site, Kew Gardens began to delight the public in 1840/41. From originally 8 acres of land, it has grown to encompass more than 300 acres.

The garden hosts more than 40,000 different types of plants. You can locate them throughout the property and in various buildings. Be sure to see the exotic tropical plants in the 19th century Palm House.

Join in a tree identification tour or take the Rhizotron and Xstrata treetop walkway opened in 2008. Wander through the 10 climatic zones in the Princess of Wales Conservatory or visit any of the museums on site.
Take a picnic and enjoy.

St. Paul’s Cathedral
If Big Ben and the Parliament buildings evoke the call of London, St. Paul’s Cathedral can be said to be the spiritual heart of the city. This London icon has a dominating presence in London. The 5th church on this site, it is the magnificent product of the architect, Christopher Wren (1632-1723).

Dating from a 1675 plan, much altered in the construction process, St. Paul’s is all columns, flying buttresses, towers and stone magnificence topped by a massive dome.

Inside, you will find mosaics by Sir James Thornhill and William Richmond, wrought iron work by Jean Tijou and, one of the major attractions – the crypts and memorials. The Lantern atop the dome draws the eye as does the Golden Gallery, the highest point on the outer side of the dome.

If you have the time and energy, climb up the 378 steps from the ground to, first, the Whispering Gallery then the Stone Gallery. Step inside the crypt to view and of the 200 memorials. These include those to Admiral Nelson, the duke of Wellington and to the buildings master architect, Christopher Wren.

Shakespeare’s Globe Theatre
This recreated version of the original Globe Theatre does its best to make the world and times of Shakespeare come alive. Everything is painstakingly recreated using the original materials of the time and employing Elizabethan craft techniques. Sam Wanamaker was the driving force behind this project.

The new Globe resides approximately 200 yards from the original site. It contains the thatched, round open-air theatre as well as an exhibition centre, cafés and restaurants. If you can, arrive on a special date such as Shakespeare’s birthday. This will allow you to experience Shakespeare’s Globe at its best.

Tate Modern
Take an old power station, add a 2 story glass box along its length, mix in modern art from around the world and you have the Tate Modern. This converted Bankside power station is easily among the largest and most innovative modern art galleries in the world today.

It is home to countless classic works of art – including Auguste Rodin’s “The Kiss” and Claude Monet’s “Water Lilies” and the more outrageous works by George Braque, Andy Warhol, Salvador Dali and Mark Rothko. The Gallery also has touring shows and commissions an artist to create a work to fill the open area.

With over 2,000 pieces presented in thematic – not chronologically-based rooms, the Tate Modern is not to be missed. There are 3 large shows annually. If tired of the new take on art, step out onto the balcony to catch a glimpse of St. Paul’s Cathedral.

Tower of London
Who has not heard about the nefarious Tower of London? It is 1 of the city’s most famous and popular landmarks. Does it live up to the hype? Find out for yourself. Take a tour guided by a London Beefeater through the grounds. See the Bell Tower that tolled executions. Take in the Bloody tower, to which the famous Princes came to live and never left.

The Tower of London has a bloody history. Lady Jane Grey, the Earl of Essex, Catherine Howard and Anne Boleyn all met their fate here. It was William the Conqueror’s idea to create this fortress. His sons and successors carried it out, elaborating on their way. Catch a glimpse of how they would have spent their days (sometimes their final days). The luxurious cell of the Queen’s House is a stark contrast to some portions of the Tower.